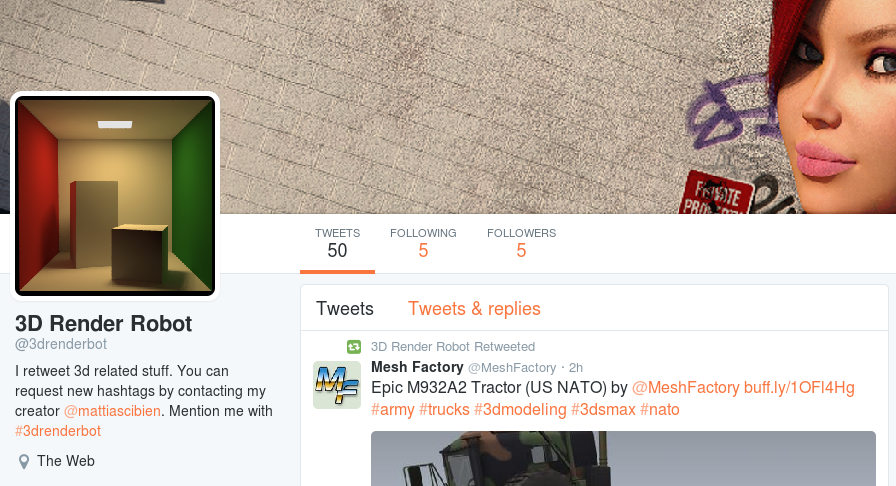 3drenderbot is a Twitter robot that retweets everything related to the world of 3d rendering, modeling and animation.

Its source is available on Github under the name of Oscar, which aims to be a generic retweet bot written in Ruby.

The bot at the moment is running under the Heroku cloud and it is in beta stage so expect downtimes.

If you wish to try it try to use the hastags #daz3dart, #3drenderbot, #3dmodeling, #3danimation, #3drendering. If you think that I missed some do not hesitate to contact me and we will discuss the inclusion; you can also fork the project on Github.

Anima Render is a OpenGL 2.0 scene renderer that started as a university project and then eveolved into an open-source (BSD licensed) one.

It has a proprietary file format similar to JSON to describe the scene and has support for rendering obj models with custom shaders support and full screen effects like Blur, Sharpen and much more.

Here is a sample scene file.

This project is actually on hold but contributions and suggestions are welcome. They will implemented as soon as possibile. The successor has also been in the works for some time, even if it is more a game engine rather than a renderer and the licensing model is not decided yet.

AutoCam is a plug-in for DAZ Studio aimed at automatic camera placement in a 3D scene.

AutoCam began a beachelor thesis project, developed at University of Udine under the mentoring of Roberto Ranon. A copy of the paper is going to be available soon, written in italian.

The goal of this thesis was to develop a plug-in for DAZ Studio that was able to place a camera (or viewpoint) in a 3D by using photographics properties like shot angle and shot lenght.

The program itself is capable to find a camera that satisfies those properties.

AutoCam is actually a complete rewrite of the original project with some additions including, but not limited to:

Unfortunately, due to lack of time, the project is currently on hold.

The original thesis source code cannot be released to the public due to licensing issues with the old version of SmartViewPointComputationLib (which is private). 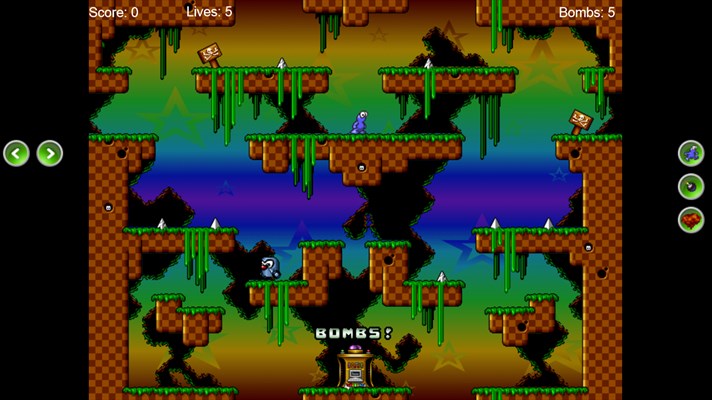 Boh! Jungle Fever is a Windows 8 game made with Construct 2 originally for the Scirra Windows 8 Game Competition.

While it did not get between the first positions it has been donwloaded more than a thousand times from the Windows Store.

Unfortunately due to the lack of interest by the public (there are still no reviews on the store after almost two years) and the amount of work required to fix the minor bugs present in the game the project is now discontinued. I originally wanted to make it avaialble again using Game Maker Studio but in the last year I completely abandoned the project. Anyway, gameplay elements are cool if elaborated in a new way so probably there is a possibility of a spiritural successor.

Ivygen is a fork of Ivy Generator by Thomas Luft, aimed at providing a stable and maintained fork with better code and performance.

In addition to the features provided by the original project, this are the changes included in the fork:

The project code is fairly stable and usable. Documentation on how to hack on the source code are available in the docs website.

You will need a program capable of opening 7z archives like 7-Zip to install the software. If needed run vcredist.exe inside the archive to install the runtime libraries.

At the moment this project is only a proof of concept. If it is effectively working this page is going to be updated

This project enables the developer to extend DAZ Studio by using the Lua language.

It is tightly based on luabind-deboostified, a fork of luabind that does noe depend on boost.

At the moment I am working on a game for PC (Windows) in the prototype phase.

During this phase I am going to try out different engines, Unreal and Unity3D in the first place, to find out which suits my needs in the game.

I am not going to provide much details at the moment except that it is going to be a puzzle game with a unique twist (I hope that has not been done before).

Before using Jekyll for my website I had a blog made with Ghost. I have also contributed some changes to the Ghost blogging platform and I also was featured on the contributors page of one Ghost version.

In August 2015, I started giving contributions to the MonoGame project. The first fix was pretty trivial but now I am working on implementing the MeshBuilder class from XNA.

I have worked on the QupZilla web browser by providing a fix for storing passwords for proxies and the Internet Explorer Bookmarks import feature.

I am credited as one of the reviewers of the book by Abhishek Shukla. I reviewed mostly the technical content.

The book can be purchased on Pack Publishing.

I have contriuted to this project a Portable Class Library version of it. I am also using it for a game I am developing, expanding the capabilities of the library itself.